June 21st was my Gramma Gray’s birthday.  I always remembered her birthday because it was on the Longest Day of the year. Gramma was very important to me, growing up – she and Grampa moved across the country from Ohio to be with us after they retired, and they supported me through lots of tough times.  Gramma and Grampa were my safe harbor.  At the end of her life, she had memory problems, and drifted away.  She probably had Alzheimer’s disease, but in the 1980’s that wasn’t something that people talked about. It was very difficult to see Gramma become unresponsive.

The happiest I ever saw Gramma was the day I married Bill Berk.  She always said she wanted me to find a man just like Grampa (they were married for 62 years).  When Bill proposed to me, in 1984, on the way back from the beach our first stop was to see Gramma and Grampa, to give them the news. 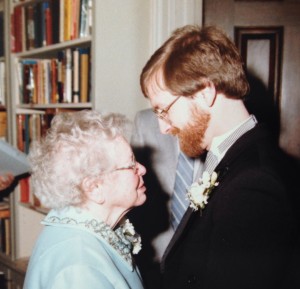 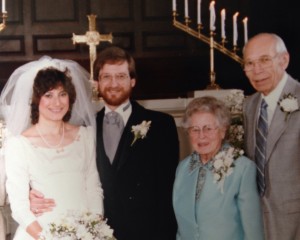 After we were married, they never said anything, but I knew they wanted great-grandchildren!  Gramma was rapidly losing her memory, though, and they moved to a care facility.  She lost weight and became very frail.  Grampa devoted himself to her, but he became frail, too.  By the time William was born, she was in a wheelchair, and was unresponsive most of the time. When she spoke, it didn’t mean anything.  We took the baby to her, and set him on her lap.  She couldn’t take her eyes off him, and patted him softly as she smiled.

Today, we know that many people suffer from Alzheimer’s disease.  We catch it earlier, can treat it to some extent, and are learning how to manage the disease to help the patients and the families deal with the difficulties involved.  Much needs to still be done, and research requires immense resources of time and money, education and out-reach.  My friends at the Village Yarn and Fiber Shop, also known as the “House of Dizzy Sheep”, know personally the toll that the disease takes, as it has affected beloved family members of staff.  They are sponsoring a team for “The Longest Day” event, which raises money and awareness for Alzheimer’s disease, and dementia.

Friend of Dizzy, Deb Jaworowicz, has just published a new pattern, for a lovely shawl named Leanai’, proceeds of which will all be donated to the Alzheimer’s association.  The pattern she designed last year, Volo, has raised $300 for the cause.  Both patterns are lovely, and I encourage you to get both of them in your library. We all know someone whose life is affected by this disease, and a hand-knit shawl would be a thoughtful gift.  Let’s support the people fighting this disease; those living with it, those supporting them, and the researchers searching for answers.

Both patterns together are a mere $10.  If that doesn’t seem enough, join me in supporting a member of the Dizzy team here.  They are only halfway to their fund-raising goal, with 7 days left. Hurry!