You all know that I stay busy.  I am a business owner and practice optometry full-time, teach knitting nationally, released “Annetarsia Knits” this summer, and am a serious long-distance runner.  “When do you sleep?” is a question I am often asked. I’ve managed to juggle all of my demanding projects with the aid of great family and office staff, and a super-intense personality with good multi-tasking ability.

However, this summer something started gumming up the works.  When I got out of bed in the mornings, I noticed that my right hip was sore.  The sensation would go away momentarily, and it didn’t hurt during the day or when I ran, so I wasn’t worried.  I cut down my mileage, did stretching and iced after running – so when it didn’t get better after a few weeks I took notice.  This was right at the point when I should have been training seriously, ramping up the mileage, but I quit running completely, and went in for deep tissue massage.  Still no improvement.  Then, it started getting WORSE, and I began limping.  That was it.  I went to see my doctor.  He noted that my right leg was shorter than the left leg (which was new), and did x-rays, which proved normal.  Relieved that there was no injury involved, he sent me to the podiatrist and physical therapist.  They both agreed that the right leg being shorter was causing the problem, but weren’t sure why.  We decided to try PT, and if that didn’t fix it, go with orthotics.  Either way, they were sure I would run again.

I’ve had 2 sessions of PT, and it turns out that my right pelvis got tilted a bit, and the surrounding muscles tightened in response, shortening that leg. The running had nothing to do with it, which is why “not running” didn’t help the situation.  So we are trying to relax my muscles, which involves a lot of heat and deep tissue accupressure.  It’s working, though.  I am already walking without a limp, and the soreness is from the treatment more than the tightening.  Boy, it’s hard for me to relax, though.  I’m really having to work on that – which is counter-intuitive, right?  But relaxed is not my default state!

In knitting, I talk about detours.  Knitters often think of them as mistakes, but I don’t see them as anything bad. They have the possibility of leading somewhere wonderful, if you will just take time to learn from this unexpected place you have landed.

This is a detour, and I am going to be a better person and a better runner for having this experience.  Sure, I am sorry to not be able to run the Portland Marathon.  But I’ve done that before, and I’ll do it again, even better.  This experience is teaching me lots of things, and is forcing me to change habits, let go of what I “should” be doing, and find another way to get where I want to go.

I am going to run again.  That is a given.  But I will do the work to get my body balanced, first, and start over – even though it won’t be easy and it won’t be fun.  But, ripping out a bunch of knitting isn’t easy or fun, either, and I’ve done that before!  I’m not afraid of detours, and I am willing to slow down!

Today I am wearing Chelsea’s Cowl. 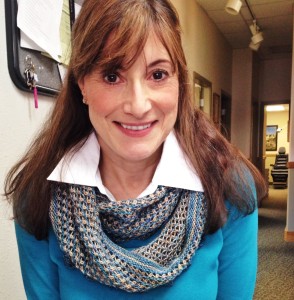 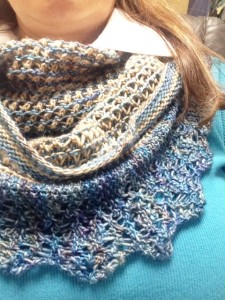 I blogged about knitting it, here, if you want to know more about it.  Chelsea was a runner whose life was cut short, and I think of her as my silent running partner.  Sometimes on a run, when I am getting tired, I feel her pulling me on, running because she cannot.  Also, today, I registered for the Boston Marathon in April 2015. That doesn’t mean I’ll actually get in, because they have to verify my qualifying time, and there needs to be room for me (they take the fastest runners first, now, so qualifying isn’t a guarantee of anything).  But I am planning to run for me, and for Chelsea. After I successfully navigate this detour!