After launching “Annetarsia Knits”, Bill and I started to plan Operation “Take Our Life Back”.  One of my goals was to get back to weaving.  I bought a Rigid Heddle loom when starting the actual writing of “Annetarsia Knits”.  I had never done any weaving, and wanted to be a beginner at something to remind me of what it felt like, and to learn what I wanted from instruction for a new craft.  This turned out to be a really good idea which worked extremely well, and had the added effect of me falling in love with weaving. But once I started the writing and everything else involved with the book, there was no time for weaving.  I dreamed about it, bought another loom, lots of books and yarn and accessories – but I couldn’t let myself get side-tracked, by actually weaving, and gradually I forgot most of what I had learned.  Uh oh.

So, when Tracy Irwin invited me to join a few friends for a weaving weekend, I jumped at the chance.  I got the message while on the way home from Rhinebeck, and it was like a sign from God.  I’d been working awfully hard on book promotion, and here was an invitation to play! Whoo hoo!  Gathering up my looms and accoutrements (weaving takes a LOT of stuff), I found myself getting very excited at the prospect of playing with yarn in this new way, and getting guidance from friends who really knew what they were doing.

Why is weaving so compelling to me?  Part of the appeal is all of the tools.  They are ancient, made of wood, string and metal – the same as they have been for hundreds, maybe thousands of years. Technology has not been able to improve hand-weaving, and I like that.  Of course, it also makes the craft not very portable, which is a drawback.  But it uses up yarn like crazy, which is a big plus for someone with a very large stash (ahem).  Weaving requires great attention to detail, and small things make a big difference.  The challenge of this calls to me.  However, even when you mess up you have pretty, useful cloth.  That appeals to me, too. 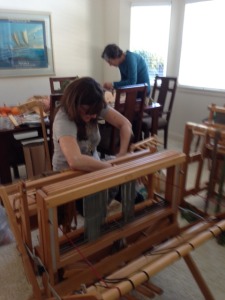 I’m “sleying the reed”, which means pulling the warp threads individually through the fixed slots in the reed. Jen is behind me, working on the warp for her rigid heddle loom. 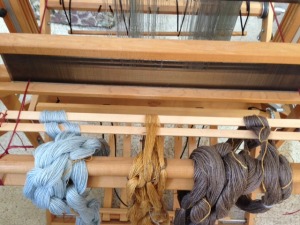 Chains of warp secured by lease sticks so they can be warped in proper sequence. Yep, it’s complicated. 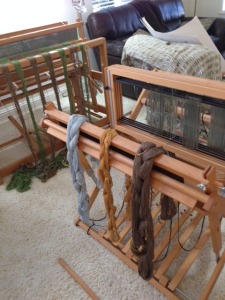 My loom is in front, and Tracy’s is behind it. She is farther along in the warping process – her reed has already been sleyed. You can see the strings going through the reed. 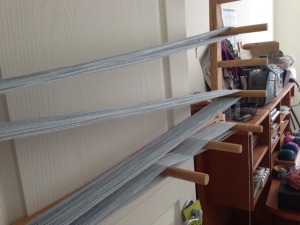 Winding the strands onto a warping board. At the bottom, see where the yarn is “crossing”. This keeps the strands separated.

Tracy invited a terrific group of weavers.  For expertise we had Tracy and Lisa Kobeck, who knows EVERYTHING.  The rest of us needed help as we love weaving but have had no time to do it, and all needed to get back in the game.  Tina Newton, Jen Clodius and I all successfully got looms warped, bobbins wound, questions answered and were inspired by each others company and ideas. 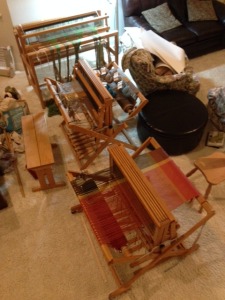 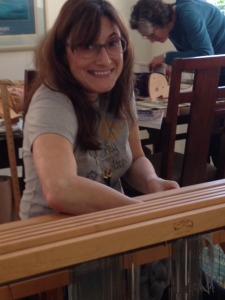 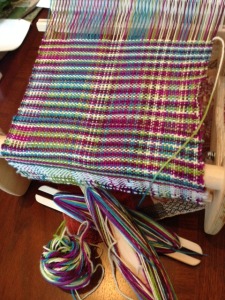 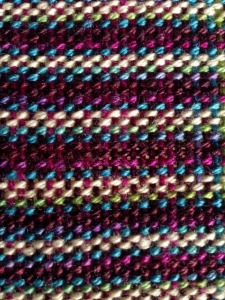 Bill, who pays more attention that you would think, said, “Can you just order another skein? What about dye lot?”  I explained that every skein was dyed by hand, so is unique – no dye lots.  That means that the new skeins won’t exactly match, he is absolutely right about that. However, the weaving jumbles the colors around sufficiently that I am betting that it won’t matter.  And I really love this colorway.  It is my new favorite Blue Moon colorway (until the next one comes along).

On my Baby Wolf, I am weaving sofa pillows, using yarn left over from preparing my new Craftsy class, “Simply Stunning Colorwork”, which will launch next week.  I’ve already woven 30 inches! The warping takes a lot of time and effort, but weaving is fast and fun.  Sometimes I like to warp – the precise steps, the touching all of the yarn.  But sometimes I just want to weave.  I also like to have multiple projects to work on, so I understand the need for more looms, now!  I’ve already ordered another rigid heddle loom from WEBS.  Yep, I’m on my way to being a weaver! 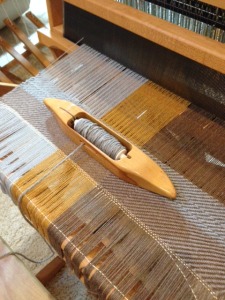 Beginning to weave the pillows. There are a few rows of waste yarn to set up, and now I am starting to weave a twill pattern. This is my first attempt at anything other than plain weave. So far, so good! 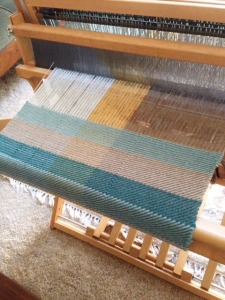 This is going to be pillow fabric. Can you see the faint vertical lines in a few places? That is where I missed spaces in the reed. I did pretty well for the first time, and I think the fabric still looks good, but I won’t make that mistake again.