I learned to knit as a child, but did not stick with it. I learned again in college when I studied in Ireland my junior year. I knit a cabled scarf, and crocheted an afghan with borrowed tools from my host family. When I returned home to the US, I got busy with school and forgot about knitting and crocheting, again. In my last year of graduate school, I fell in love and wanted to do something special for my boyfriend, and decided to knit him a sweater. I have no idea what prompted that impulse, and obviously had no idea there was a potential curse involved. Having no money, I gravitated to the Red Heart acrylic at a local dime store. Inside the ball band was a pattern for a crew-neck Argyle sweater. The yarn was dirt-cheap, and there was a lot of it. I had learned to knit on straight needles in Ireland, and was a little confused by all of the circular needles in the store. They looked pretty scary. I finally found some “real” needles, metal straights, and set about making a sweater.

I didn’t know a thing about intarsia. No clue. But I could see from the chart that I was supposed to put the colors in different places, and it seemed easy enough. I vividly remember looking down to my feet and seeing the three different color skeins on the floor as I moved them around to untangle them. I didn’t know about bobbins or butterflies, and knit directly from each skein!

Most of the sweater was solid color, as the only argyle was one motif on the front, and I managed just fine. Bill loved his sweater. I had oodles of yarn left, so I reversed the colors and made another one for myself.

By the way, the boyfriend curse did not affect me. Bill and I were married April 1985, and have been happy ever since. I’ve made us a few more sets of matching sweaters along the way, but these first argyles have a special place in my heart. They will last forever, too, made out of Red Heart acrylic. Mine still looks as good as it ever did, 30 years later.

If you want to try a new craft, it’s easier today than it was in 1984!  Craftsy is having a flash sale today.  Use this code to get up to 50% off for Saturday, only.  Many new classes are included.  No matter how we learn something new, there is no reason to be intimidated.  If you want to make something, you can. Just go for it!  And if you sign up for any of my classes at events, or either of my Craftsy classes, I will be there to explain things and reassure you.  Making something with your hands is about the most rewarding thing you can do, and it is fun to try something new, to be a beginner again. 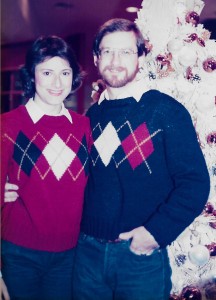 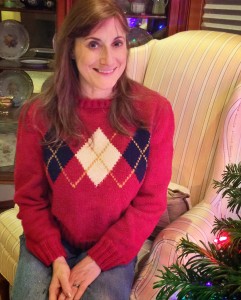 Anne in her argyle sweater, Christmas 2014