I had so much fun knitting the Manolo sock that I knit 2 pair of them!  Just in case one goes missing… as they do occasionally.  It had been a long time since I’ve knit a pair of socks and it felt great to work with this really intricate pattern that was consistently interesting.  It was published by Twist Collective in 2010, so it’s been in the pattern stash for quite awhile.  I must say that I think it is much more effective in this multi-colored yarn than the solid color featured in the pattern.  This is Regia Digital Future Color, purchased at Webs at their recent anniversary sale.  I never miss a Webs sale!

Before I can do personal knitting again I have some fun things to knit for classes, and I will be doing some instructional videos as well.  There is a new Argyle pattern coming that is knit in the round!  There isn’t one included in Annetarsia Knits because I didn’t think of argyle socks being done ITR. I’ve knit plenty of them, but the socks are traditionally knit flat, and that is how we knit them in my classes.  However, as time has passed I’ve realized that yes, this is a pattern worth writing.  So, I’ve teamed up with Debie Frable of Dye House (www.serialknitters.com) for some amazing colorways in her terrific SNUG sock yarn.  The resulting socks are turning out beautifully, and the pattern will be released soon.  So, look forward to that!

While working on the new and improved classes I’ll be teaching for VKL in June, I will enjoy wearing my new fussy, adorable pink socks!!! 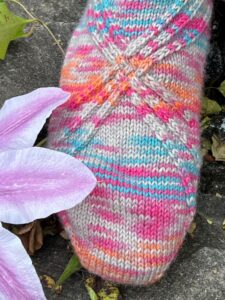 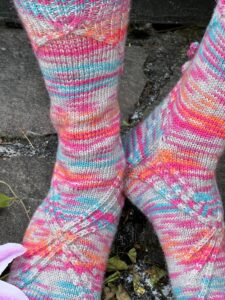 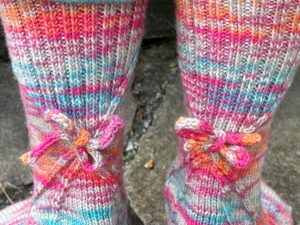 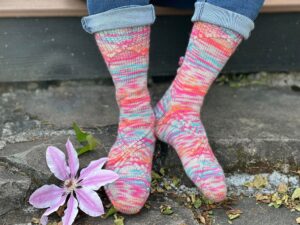 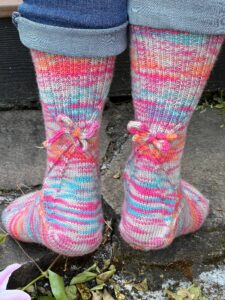