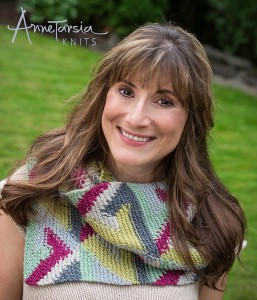 Anne Berk was certified by The Knitting Guild of America as a Master Knitter in 2003.  She has been a knitting instructor since 1998. She has taught Annetarsia techniques for Stitches events, Sock Summit, Madrona Fiber Arts, Fiber retreats, and local yarn store classes.  Currently, find classes with Anne at Vogueknittinglive.com events!

Anne went to school at Lewis and Clark College, where she graduated with a Bachelor’s Degree in Natural Science in 1980. She then went on to Pacific University College of Optometry, where she received her Doctor of Optometry in 1985. When she isn’t knitting, she is the owner and optometrist at Happy Valley Vision Source (Happy Valley, OR)  and is a Diplomate of the American Board of Optometry. She is married to Bill Berk, and is the mother of two adult children. Her main interests include: knitting (of course), weaving, distance running, and playing guitar.