This first wave of books went all over the world, and there were a gratifying number of them being sent.  It was apparent that a trip to the Post office was in order.  But, which one?  The post offices near home and office were small, old, and slow.  Taking them in was going to be up to Bill, because the Jeep was the only car large enough for the job, and I didn’t want this to be any harder on him than necessary.

So, my pick was the Milwaukie Post Office, which is about 20 minutes west from us and fairly large. It is across the street from where I went to high school, so I have a good association with it.

But yesterday, driving home from Sunriver, we passed the Boring Post Office.  Boring, Oregon is 20 minutes east from our house.  When I was in high school it was a small farming community on the way to Mt. Hood, and not much has changed since then.  It’s always worth a giggle, driving through, to see the Boring Fire Station, Boring High School, etc.  The Post Office looked really nice, though.  Bill and I looked at each other, and the light bulb went off.  I wasn’t sure I wanted “Annetarsia Knits” to have a Boring postmark, but Bill thought it was hilarious.

When we got home, we considered the options.  Family vote agreed with Bill, so I went with their judgment.

This morning, Bill packed up the Jeep, and headed to the Boring Post Office. 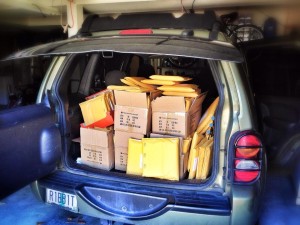 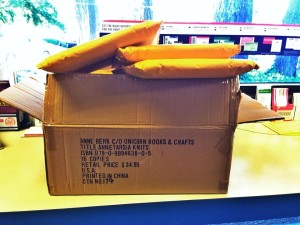 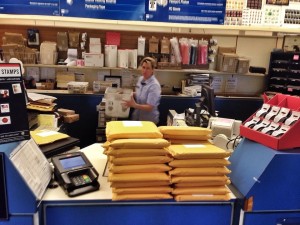 He was so impressed with the Post Office, that it is now going to become our “go-to” post office.  No line, the workers were charming, patient and helpful.  When someone else came in who needed help, another worker came out to take care of them.  They helped Bill fill out the customs forms, and counted to make sure all the books were accounted for.

So, here is to the Boring Post Office!  Helping “Annetarsia Knits” get to the knitters!