At the 2015 Rose City Yarn Crawl, I saw a lovely cowl at The Naked Sheep Knit Shop, worked up in Universal Yarn Bamboo Bloom Handpaints (48% rayon from Bamboo, 44% wool, 8% acrylic, 100gms/154 yds) by owner Cheri Clark.  I loved the colors, and how Cheri maximized the impact of the thick/thin yarn with the most basic of textured stitches: garter stitch, strategically placed.  I bought a skein in the Cherry Blossom colorway, and this weekend I knit up my own cowl.  Cheri told me that her cowl was all knit, in the round, but when she reached a place where the yarn thickened, she purled those stitches, creating occasional garter stitch texture.  I decided to make my version a Moebius cowl, and here is how I did it, if you would like to make one, too.

The ball band recommends size 9 US, but for a cowl, needle size doesn’t matter overmuch.  Moebius cast-on requires a circular needle at least 40″ long, and the longer they are, the better. I prefer to use a 60″ circular needle length, and this is basically the only use I have for it.  Therefore, my stash of 60″ circs is pretty thin, and I worked with what I had, sized 10 1/2 US. With Cat Bordhi’s Moebius cast on method, I cast on sts until my needle was full when circled as she directs.  I have absolutely no idea how many sts I ended up with – it was a lot of them!  Then I started knitting, and purling whenever I reached a thick section.  It was terrific for practicing my Continental knitting technique!  With the Moebius cast-on, your first row ends up in the middle of the fabric.  I’ve left the cast on end un-buried so that you can see this. 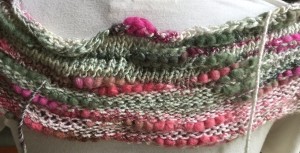 The strand on the left is where I cast on. The strand to the right is at the end of the bind off. They don’t line up, but it doesn’t affect the look of the finished project. The project is worked from the center out. Even though I always knit stockinette, the Moebius flips at the middle of the round, so the top half shows knitting, and the bottom half shows purling. The garter stitch over the thick areas creates some cohesion, which is really great.

Cat recommends making sure that you only have 1 twist in the project, but I put 2 in mine, just for fun.  It worked out great, and just made the fabric a little more twisty.

I worked until the ball was getting small enough to make me nervous about running out of yarn for the bind-off, which requires a LOT of yarn.  I used Jeny’s Surprisingly Stretchy Bind-off, which creates a very nice edging.  Wet-blocked and laid out to dry, and I was done!  The entire project took just a few hours of mindless knitting time. 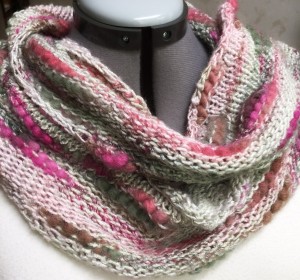 The finished cowl! Soft, cozy, and not too warm for the spring that it represents.

If you want to use all of your yarn for the cowl and not stress about the bind-off, I recommend knitting until you run out of yarn (the beginning of the row doesn’t matter, you can end anywhere) and bind off with a different skein of coordinating yarn.  This would make the edge a design element and show off the Moebius construction.