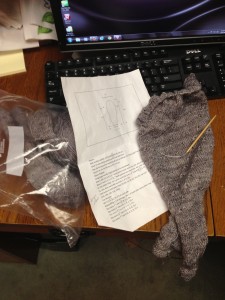 Knitting back where it belongs!

I lost my knitting yesterday.  Bill and I were doing a pick-up photoshoot for the Book, and the Jeep was piled with boxes – all of the Book projects, plus yarn, clothing, and photographic equipment.  I grabbed the final sleeve for Mithril, so that I would have something to knit while he set up.  I put the pattern, extra yarn, the finished sleeve for comparison, and the sleeve in progress all together in a big ziplock bag.  I was thinking about a lot of stuff, and loading the car took awhile, so it wasn’t until I was in the car seat that I realized I didn’t have the knitting.  Hmm.

At this point I was wishing that I hadn’t put it all together.  if I just lost the sleeve in progress, I’d be fine, but the extra yarn and finished sleeve?  Yikes.  I wondered if the project hid itself in retaliation for not working on it for awhile.  But hey, I was busy!  I knit two Tawanka shawls (for the Book, you will see them later) and Chelsea’s shawl.  Mithril wasn’t a UFO (un-finished object), it was merely a NFO (not-finished project).  No disrespect intended.

After cleaning several rooms in the house, I gave up.  Bill came home, empty-handed and adorably concerned about the lost knitting.  I went out to the garage to check the car myself.  Going around the back to my side of the car, I spotted the bag on the garage counter.  It made it that far, but not quite to the car.

So, I have a cleaner house, organized knitting, and am going to get the sleeve done pronto, before it can try to get away again!