It happens to everyone, even me.  Those of you who think that I escape the Cat spit stage because I am magic, or something…no.  Not true.

To prove it, here is the Craftsy plaid mitt that I knit last night. I didn’t do any tidying as I went, this is right off the needles, and the thumb isn’t knit yet (Those sts are on a piece of orange yarn to secure them)

Annetarsia is fast, easy, and eventually looks great, but at this stage it isn’t pretty.  But lots of things aren’t always pretty until they are finished (Lace, I’m looking at you!) So, if your knitting looks messy in progress, it doesn’t mean that you aren’t doing it right.  Keep going!!! 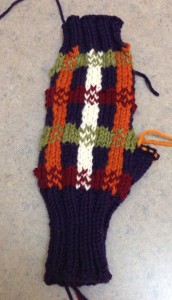 From the RS, but unblocked, no ends buried, right off the needles. Thumb sts are on a piece of yarn, waiting to be picked up to knit the thumb. Notice the really loose sts on the top row, in orange – where the yarn isn’t settled. Everywhere else the yarn has settled into place, although not secured. 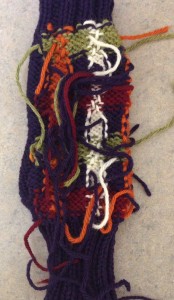 Here is the mitt seen from the wrong side. This is what happens when you don’t do any clean-up as you go. Actually, I’ve seen worse! It will only take about 10 minutes to get the ends buried. Once the mitt is blocked, it will look terrific! 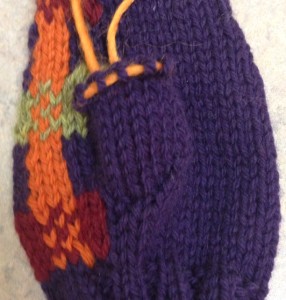 I increased for the thumb gusset every RS row until I had 9 thumb sts, then worked straight until the gusset was deep enough. There isn’t a right or wrong way to knit a thumb gusset, really. Try different ways to increase, and see what happens!