I’ll be honest.  The reason I signed up for the Gramercy Park Video KAL was that Patty Lyons, the designer, mentioned a super-stretchy CO method for lace.  I am a sucker for learning new ways to cast-on for projects. The fiddlier, the better.  When I swatch new yarn just to see what it looks like and how I like it, I will go to my library and look up a new, obscure cast-on to try out.  Yes, I’m that person.

When I was a kid, we played “cats in the cradle” games with string, at recess, and I absolutely loved those, so I think that casting on is a pretty obvious next step.  What is interesting, though, is that I have a TERRIBLE memory for cast-on methods.  This is why I don’t teach on the subject.  Every single time I use one, I have to look it up.  I’ve probably done Judy’s Magic Cast-on 500 times, and I still need to look at the instructions. Sure, for JMCO it only takes a glance, and it comes back to me.  But, still!  The only cast-ons I have truly memorized are long-tail (in knit version, or knit/purl version. Go, me!), knitted cast-on, cable cast-on, and e-wrap.  Those were the early ones I learned, and they stuck.

For my Gramercy Park swatches, I used the German Twisted Cast-on, which is super stretchy.  After doing 4 swatches, I had it memorized, but I know from past experience that this is temporary.  I’ll need to look it up again, next time!  It’s a good one, though, and my swatches look great.

Patty teaches a 2-needle cast on for this project, and it is the fussiest, fiddliest cast-on I’ve done in a long time.  I love it!  I won’t lie, it took me about an hour to cast on for the back.  But, I had to find the right needles to use, and that took some time.  One needle is the size you knit the first few rows with (I’m using size 5 US), and the other is tiny, size 1 US.  She suggests using straight needles, so I started with dpn’s.  I rapidly discovered that those would be too short for the 129 sts I was casting on.  This resulted in a search for my long straight needles.  When I started over, things went pretty well because I had gotten some practice in, with the dpn’s.  The Valley Granville cotton has a lot of plies, so I had to be very careful not to split the yarn.  The cast-on looks very tight on the needle, so the stitches were hard to count.  Hence, the slow progress.

When I was finally satisfied that I had the correct number of sts on the needles, and pulled out the size 1, I purled all sts onto the size 5 circular I will be using for the first section of the sweater, and it stretched out like a cat in the warm sunshine.  Then, I set the knitting aside, and went to bed without putting the knitting away.  That was a mistake.  When I returned home from work the next day, I found a mess.  One of the cats that live in our home had thought the cast-on was pretty cool, too, and had apparently carried through most of the house to play with. 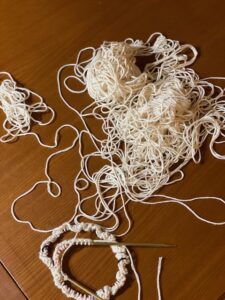 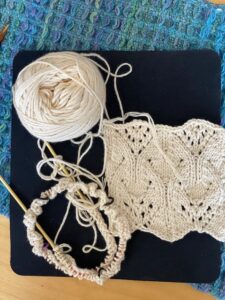 It was an absolute mess.  I had ordered extra yarn from Webs, and thought about junking the knotted, tangled mess.  Some of the soft cotton yarn was actually chewed up.  But, I am a pretty good yarn wrangler, so I set about trying to save the skein.  I did have to cut it in a few places (the chewed bits), but as you can see, I was able to wind up most of it over the next hour.  On the plus side, my understanding husband took over the making of dinner, as he completely understood my priorities in this emergency!

After order was restored to the universe, I started working the chart, and made it to the waist shaping before heading to bed.  Patty teaches how to map the pattern, which means you don’t have to refer to the written directions very often.  This is pretty cool, and I love the idea.  Here are photos of the WIP, with the blocked swatch above it.  As you can see, the German Twisted Cast-on worked well for my swatch.  This photo isn’t really fair, because the knitting on the needles is worked with a larger needle to enlarge the sweater slightly around the hips, and it isn’t blocked, so doesn’t lay quite flat.  I like the edging on both, but there is no doubt that on the needles, the 2-needle cast-on was much more stretchy. 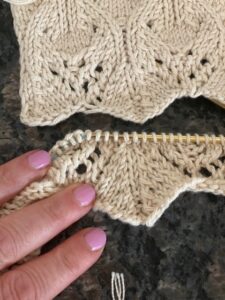 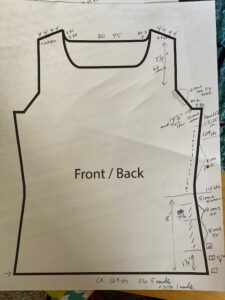 I’m not going to show you the cast-on in progress, because no spoilers!  If you want to join in the fun, sign up at Gramercy Park Video KAL and check out Patty’s very thorough video lesson.  It is worth the price of the whole class.  I can’t even imagine writing up instructions for this.  Nope, not going there.  It is a really great cast-on though, and I will refer back to the video every single time I use it, guaranteed!