My first set of swatches, detailed on yesterday’s post, measured slightly larger than the expected stitch/row gauge called for by the Gramercy Park pattern.  This is normal, as we all knit differently  – we are not machines.  I like the fabric, but wondered if I might like it BETTER if it was slightly denser.  So, I cast on for new swatches with a size 4 US needle of the same type (addi Turbo Lace) to see how I liked them. Notice that I didn’t cast on because I thought I did something wrong, or that I felt that I need to match the gauge of the designer.  In this case, I know that the designer, Patty Lyons, did the work and calculated the gauge carefully.  These weren’t numbers from a ball band, or an anonymous test knitter.  Patty knows what she is doing, and is honest with her numbers.  She expects us to also do the work and be honest about OUR numbers.  They won’t always match because…duh…we are different people.   The reason I’m doing more swatches is because I don’t want to wonder later if changing needle size would give me fabric that I would be happier with.  Changing my knitting method would also help, but that is very difficult to do, and I’d rather knit a different size pattern to make my current gauge work, than attempt to knit differently for an entire lace sweater.

Patty will be guiding all of us on what to do with our various gauge numbers, and how to make the pattern work for the gauge of the swatches that we like best.  This will require a bit of math, but it’s not calculus (side note: why are we still teaching calculus at non-grad student level?  I have never had a cause to use calculus since I took the course in college).  This is simple math, although one of the strongest tools in a knitter’s tool box.  All I need to do while awaiting her instructions is to create more swatches for me to choose from, and accurately measure them : unblocked and blocked. Then the fun of picking which size sweater I will be choosing to knit, and which size needles I will be using can begin!

For this set of swatches, I knit them at the same time again.  I cast on fewer stitches this time:  31 sts vs 45 for the first set.  I ended up measuring 2 repeats for Swatch 1, and decided to just cast on 2 repeats, this time, and the edge sts from the chart, for 31 total sts.  I knit the full 26 rows, and then repeated rows 1-10, for 36 total rows – identical row count to Swatch 1.  So, my swatches will all be equally deep, but Swatches 2 will be narrower.  This not only made the knitting go faster, but can tell Swatch 1 and 2 apart!  This is valuable, because sometimes changing needles doesn’t change gauge as much as you think it might, so it is nice to be able to label them in some manner. 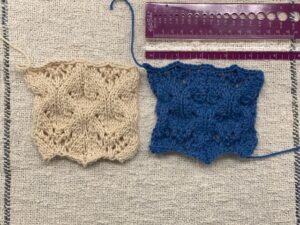 Swatches are 31 sts wide, 36 rows deep (not counting CO and BO rows). They were knit on the same needle at the same time, and are identical in total size. Unblocked, they are approximately 4 in square, so I am very close to the stated pattern gauges of 27 st/34 rows to 4 inches. The white swatch is Valley Yarns Granville (167 yd/153 m per 50 g hank; 90% Pima Cotton, 10% Merino Wool) , the blue swatch is Cloudborn Fibers Merino Alpaca Sport (137 yd/125 m per
50 g hank; 80% Superwash Merino, 20% Baby
Alpaca) Both yarns were purchased from Webs (www.yarn.com)

Blocked Swatch 2 report: the 2 repeats of the chart total 28 sts.  Pattern blocked gauge is listed as 27 st/4 in.  I’m posting close-ups, so that you can see that I am measuring from 1 st inside the repeat, and the swatch knit with the size 4 needles measures EXACTLY 4 in.  This is so unusual that I triple-checked everything.  Both swatches meet gauge for stitch and row, with no fudging whatsoever.   It’s amazing, and I’m really happy, but this doesn’t necessarily mean that Swatch 2 is the best choice for the sweater.  I like the fabric on all of the swatches.  I’m going to wait and see what Patty has to say about gauge, the fabric, and choosing a size.  It’s possible that the slightly looser gauge might be the one I go with.  Knitting the second set of swatches gives me valuable knowledge, and the ability to have an informed choice. 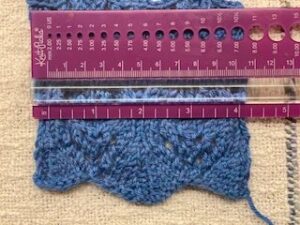 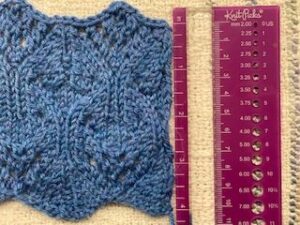 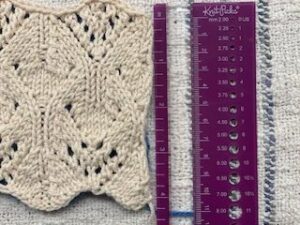 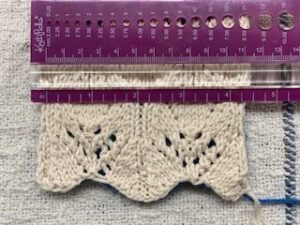 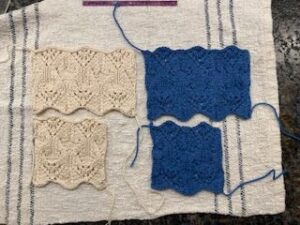 The second set of swatches knit up faster than the first set because of an important and encouraging factor.  I am starting to get used to the lace chart.  It isn’t memorized yet, but I’m familiar enough with it now to be able to knit without constantly checking my chart. I can hold a conversation on WS rows, and read my knitting on either row to make sure that I am not going off into the weeds.  With Swatch 1, I had to un-knit occasionally because I counted incorrectly.  That didn’t happen once when knitting Swatch 2.  I tell my students that swatching lace helps you to decide if this is a chart you want to spend hours knitting.  Some charts are more fun to knit than others, for lots of reasons personal to each knitter and the mood they are in, at the time.  Swatching is a dating game between the knitter and the yarn/needles/pattern.  You have to all be compatible.  After this second set of swatches, I am very comfortable and confident that when I cast on, this will be a pattern I will enjoy knitting twice. The cotton sweater will be a different experience to knit than the merino, so I know I won’t be bored.  I’m very much looking forward to the adventure.

While I wait for the pattern release, and more information from Patty, I am going to stay busy.  I have to get my classes ready to teach for VKL in May (you can bet that these swatches will be added to the Gauge Master Class samples!)  concentrate on finishing Underwood (I’m on the second sleeve), and maybe do a bit of weaving on that tablecloth…..