Hey, everybody.  It’s been over a month since I have been able to post, and I will try to explain why, but after a full month I am coming to accept that we may never have all the answers.  Friday, May 28th was a normal workday. I had a routine appt with my GP over the lunch hour to update my thyroid medication, then went back to the office and saw my next few patients.  Then, I felt a bit queasy and found myself vomiting up my lunch in a wastebasket.  This was a real surprise, I never have a queasy stomach.  I was about to go tell the staff I needed to reschedule the rest of the afternoon, but the next thing I knew Bill was yelling at me to wake up and telling someone to call 911.  He found me in the hall, and caught me before I fell.  My BP was 59/38, and I was rushed by ambulance to the nearest hospital.  My organs were shutting down, my lungs filling with fluid, and after a chaotic period in the ER to stabilize me, I was taken to ICU. I had a procedure to drain fluid building up around my heart, which stabilized me enough after a few days to transfer me to another hospital, with a Pulmonary ICU.  There, they drained almost a gallon of fluid from my lungs.  During all of this, they were treating me with everything they had, multiple antiobiotics and steroids, and norepinephrine to raise my BP.  They also were testing me for EVERYTHING there is a lab test for.  Auto-immune disorders, fungi, Rheumatoid factors, HIV, Covid, foreign bugs, platelets, you name it, trying to figure out the underlying cause for the only diagnosis they could come up with, which is pericarditis – an inflammation of the lining around my heart.  It seemed like every cardiologist in the city was visiting me, they all wanted to be the one to figure out the mystery.  In the end, they had to call it “idiopathic”, which is the medical term for “shit happens”.  I have been officially declared the healthiest person anyone has ever seen who almost died inexplicably.  Meanwhile, my body was trying to recover from all of the procedures and medication that was used to save my life. As the drugs got tapered off, and the IV Lasix helped drain the fluid from my body, I started to breathe more easily and recover energy.  I was moved from ICU to the hospital, where I started to eat real food again, was able to get out of bed and walk around, and gradually regain strength.  After 8 days, I was sent home to recover.  My only medication was large dosage of ibuprofen to prevent inflammation, tummy med to keep the ibuprofen from damaging my tummy, and an old gout med that has been shown to prevent recurrence of pericarditis.  If you want the blow by blow of the whole adventure, I did post from the hospital on Facebook on my Anne Berk page.

Anyway, during the last few days at the hospital, I had Bill bring my knitting bag. I had been working on the wool version of Gramercy Park, and the back was knit up to the armholes.  I finished the back in the hospital, and knit the front and both sleeves during my week at home, recuperating.  I didn’t have the energy to block the pieces, so decided to seam the shoulders and set in the sleeves, before blocking.  This week I had the opportunity to block both sweaters and finish seaming.  Our daughter and a friend flew in to visit and check on me.  Deborah had a Zoom meeting scheduled yesterday and hadn’t packed anything to wear.  She saw the wool Gramercy Park sweater on the dress form in my office, and stole it!  Well, it looks pretty good on her, you have to admit.  That’s OK, I still have the cotton version, and wore it to work, yesterday.  This is a great sweater pattern, I love it.  I tell you, when you are in the hospital, exhausted and depressed, there is nothing better to knit than a lace pattern you have memorized and have already knit.  Someone was watching out for me, every step of the way. 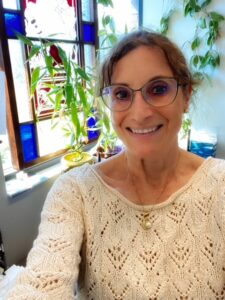 Anne wearing the Cotton version of Gramercy Park to the office on June 28, the one month anniversary of The Event. 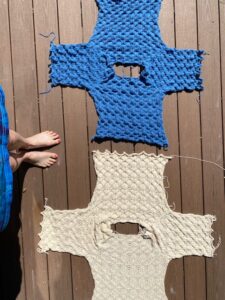 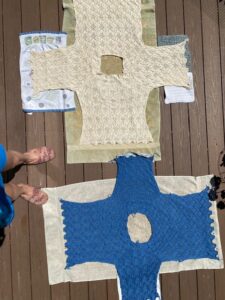 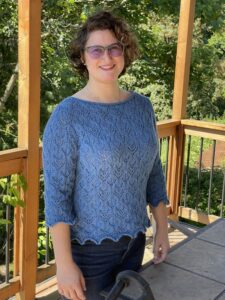 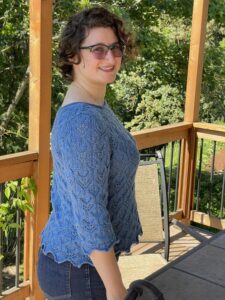 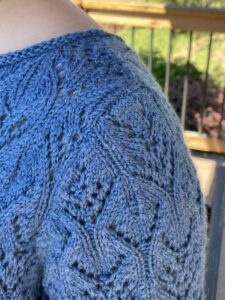 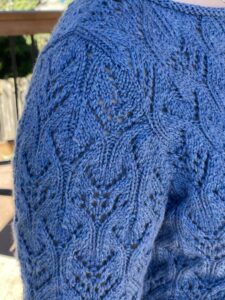 more shoulder, Gramercy Park. Just because it is so gorgeous.

I continue to improve, and am very grateful for all the good care I received, and my continuing recovery.