It was tough to leave Henderson’s, we were ready to move in with our books and bags. But across the road was another interesting cemetery, which was very picturesque in the winter chill 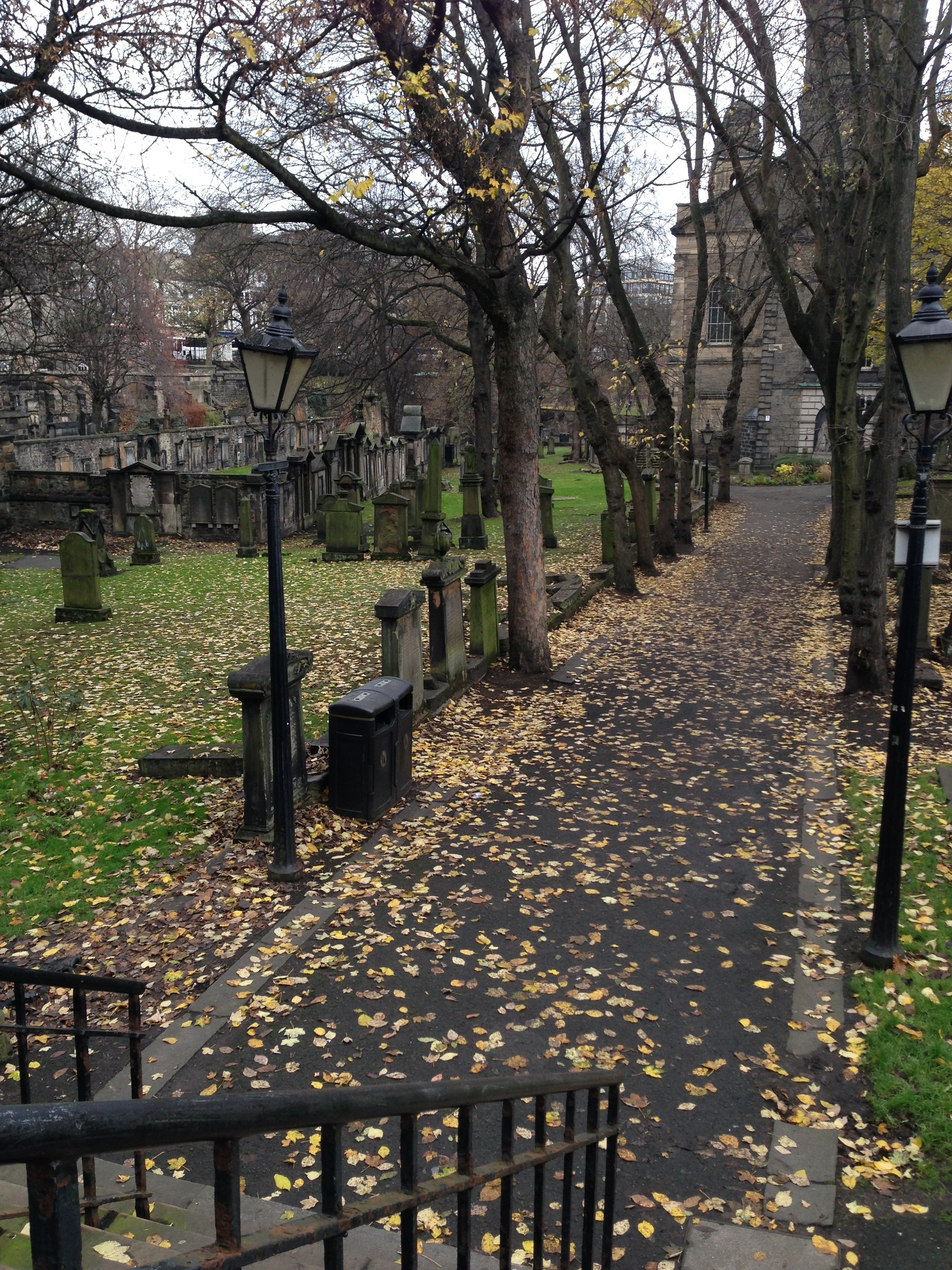 cemetery just outside of Henderson’s

We headed back into New Town (so named because it was built in the 1700’s, as opposed to the Royal Mile, which goes back at least to the 1200’s), to do some Christmas shopping. I can’t show you what we bought for other people, but I can show you my souvenirs!

Bill is always on the lookout for anything with sheep on it, for me. Here is the new blankie he found, for my computer station. 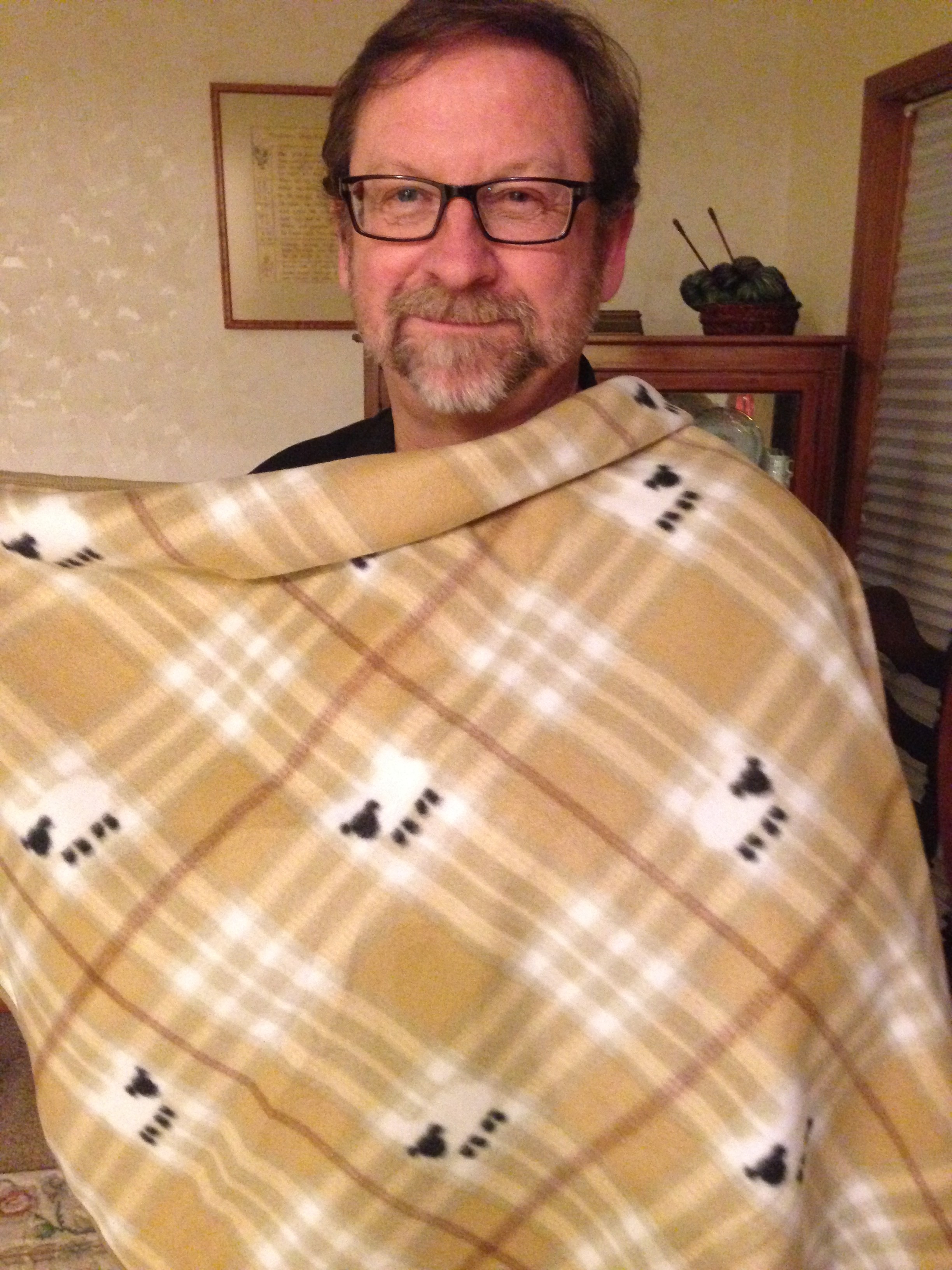 Bill found this blankie on a sale rack. Only 10 quid! What a deal!

We also couldn’t resist the mug, and he insisted on buying the keychain, too. “You will use it for something”, he said. 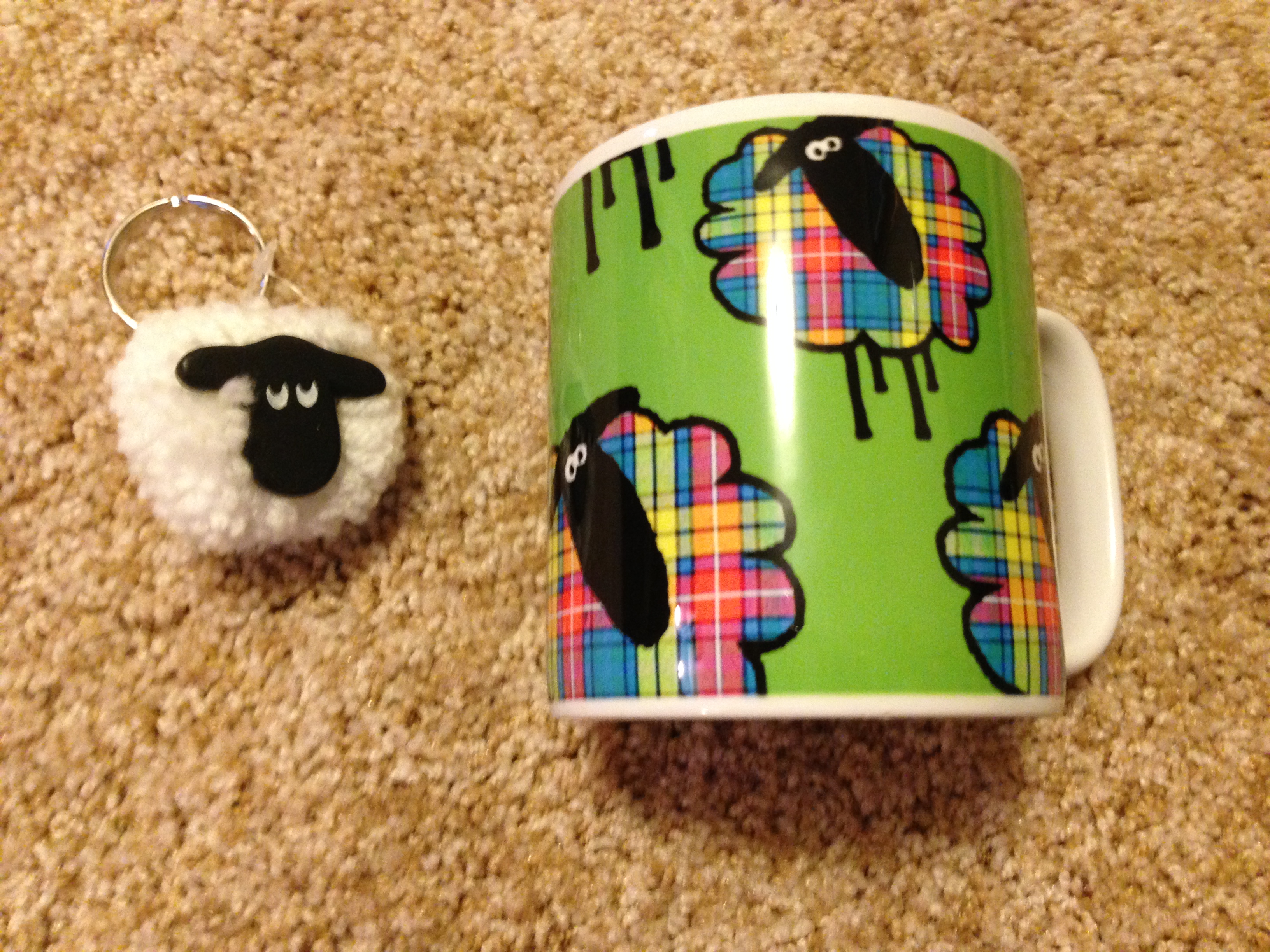 You may notice that there is a definite plaid theme. Scots are mad for plaid. There is argyle around, for sure, but plaid is EVERYWHERE. On the bus seats, on any item of clothing you can imagine, on billboards, on furniture, bedding, tableware – plaid is the new black.

Found some Harris Tweed on sale, which was seriously amazing. They practically invented plaid, and herringbone, too. Even on sale, the small stuff was all I could afford. 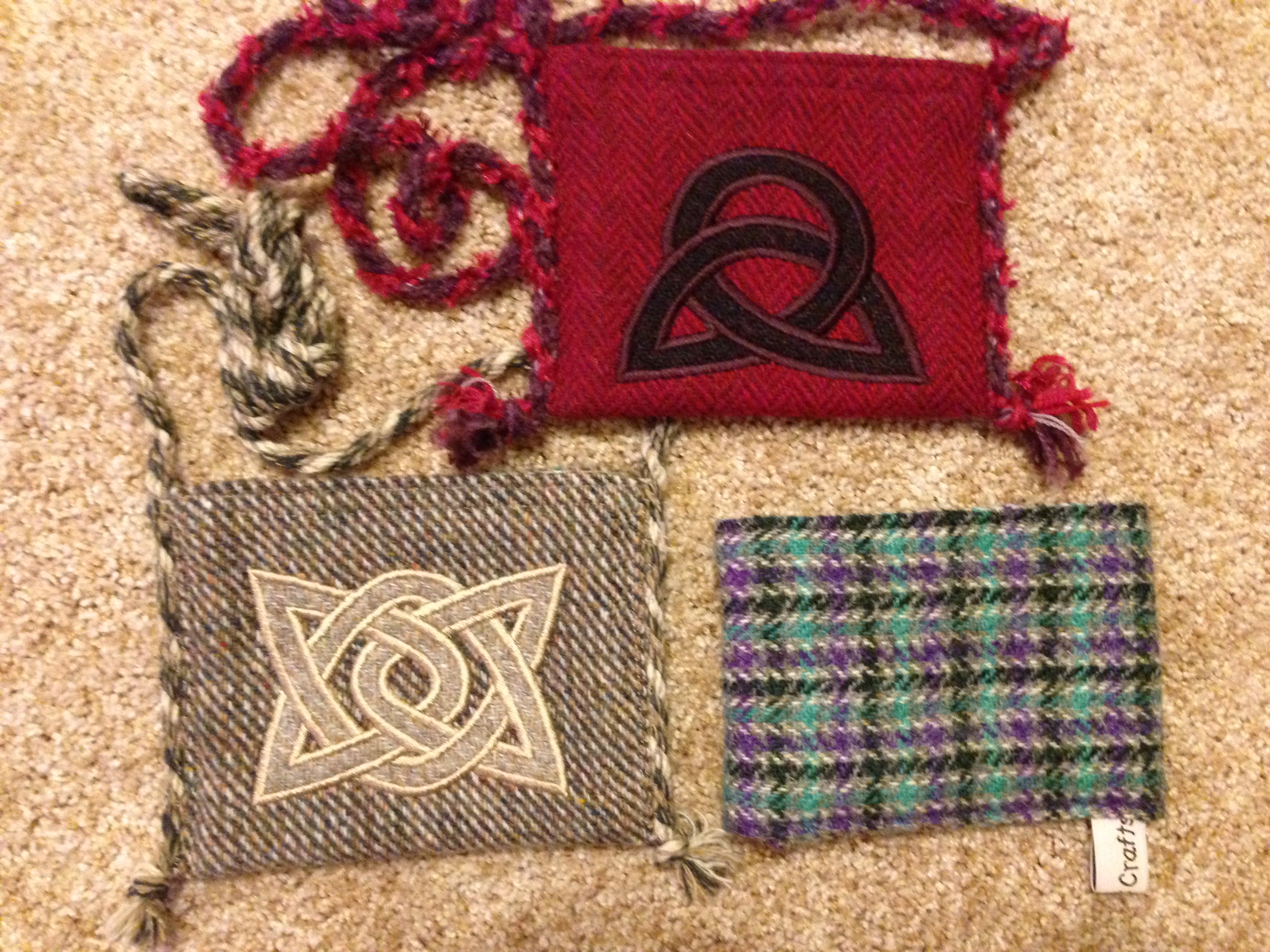 One thing I wanted to buy before we left Scotland was tights (and yes, they are available in every plaid imaginable, but I wanted neutral colors, thank you very much). I didn’t need expensive, fancy ones, I wanted the ones I saw countless women wearing on the streets. Tights and skirts (yep, mostly plaid) are basically a uniform for Scottish women of all ages, and they looked warm, comfy and dignified. I could go for that. So I asked a few shopgirls where they would recommend I go, and got the name of a dept. store with a super Black Friday sale. All right!

The place was a madhouse, and I am sorry that I didn’t get photos. It was crowded, busy, and boy, the Scottish take their lingerie seriously. There were TWO FLOORS full of things to sleep in and lounge in. Finally I got to the back where the stuff for feet was kept. Slipper socks, slippers, hose, socks, racks and racks and racks of tights. I admittedly don’t shop for clothes often, but I have never seen anything like this. I played the “confused tourist” card and asked some nice ladies to help me with sizing. Turns out I am still a Medium, in Scottish sizes. Also, the tights were labeled with numbers, and it was explained to me that the larger the number, the denser the fabric. They go from 20 up to 80. I went for the middle range. 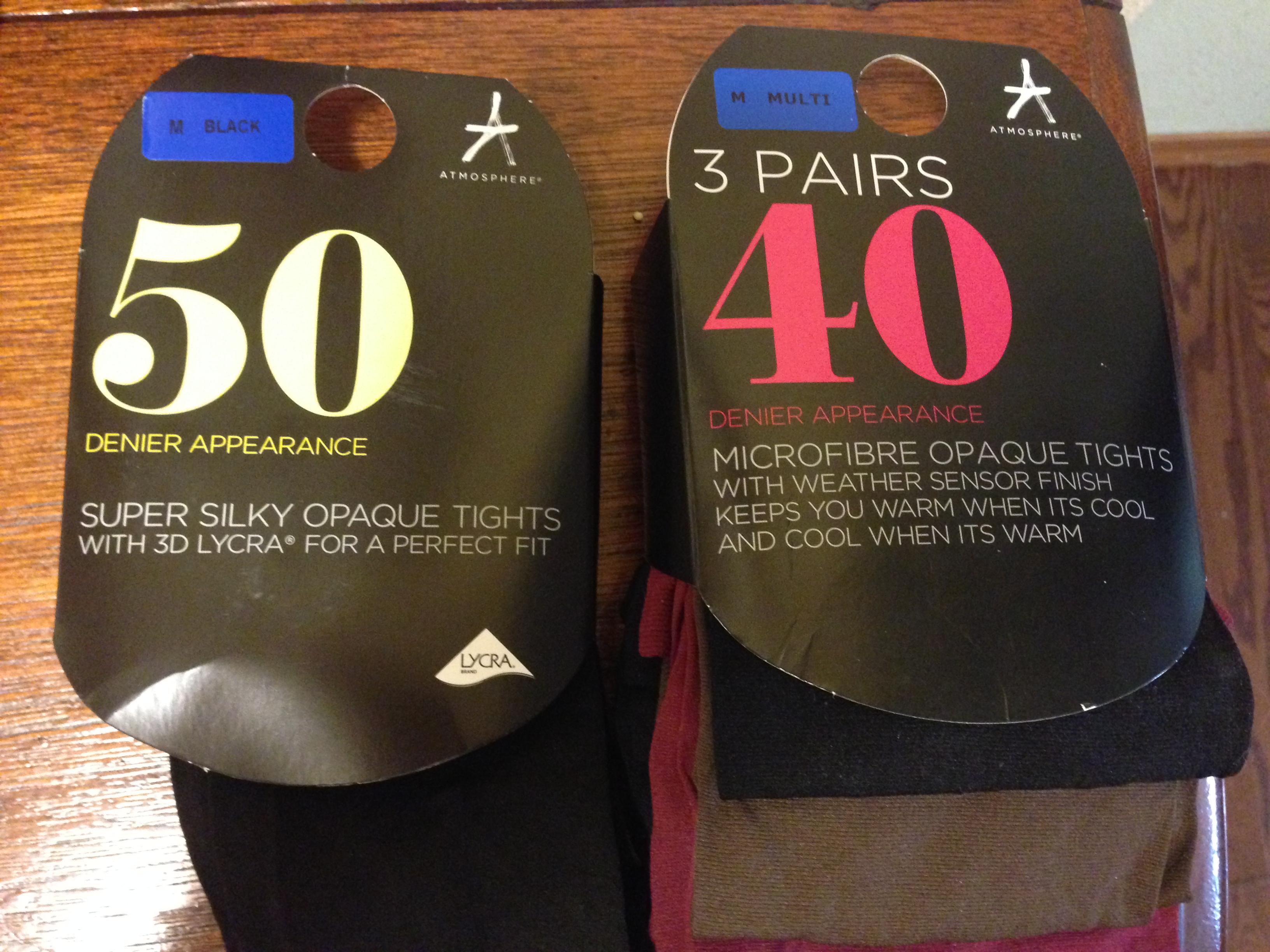 Bill bought some adult size footie pajamas that look like a penguin, that he plans to use for a photo shoot. So, watch for that one (the model will NOT be me). These garments are apparently the rage, for both sexes, and there was a big display window of them. You can be Kermit the Frog (I voted for that one, but Bill vetoed), a pig, a sheep (which almost made it into the bag, but you have to say no to SOMETHING), and every kind of jungle animal imaginable. I didn’t see Snoopy (I looked), but there were Disney characters. Remember, these were all for adults! Grown people! I wonder what was in the kids section…

We never made it to any of the other depts, because my tolerance for shopping is extremely limited, and that was it for me. But it was amazing.

The crowds meant all of the pubs and restaurants were full, so we stopped at a cafe for tea and a muffin and relaxed, waiting for the dinner rush to subside. Then we had a late bite at a pub on the way home to pack. It was a lovely day, indeed.